Schaeffler Group introduced the "Expanded calculation of the adjusted rating life" in 1997. This method was standardised for the first time in DIN ISO 281 Appendix 1 and has been a constituent part of the international standard ISO 281 since 2007.

The basis of the rating life calculation in accordance with ISO281 is lundberg and Palmgren's fatigue theory which always gives a final rating life.

However, modern, high quality FAG bearings can exceed by a considerable margin the values calculated for the basic rating life under favourable operating conditions. Ioannides and Harris have developed a further model for fatigue in rolling contact that expands on the Lundberg and Palmgren theory and gives a better description of the performance capability of modern bearings.

The method “Expanded calculation of the adjusted rating life” takes account of the following influences:

The required size of a FAG bearing is dependent on the demands made on its:

The term dynamic indicates that the operating condition is with the bearing rotating. This is not a variable load. carrying capacity is described in terms of the basic dynamic load rating and the basic rating life.

The fatigue life is dependent on:

The basic dynamic load rating C applies to rotating rolling bearings. It is: 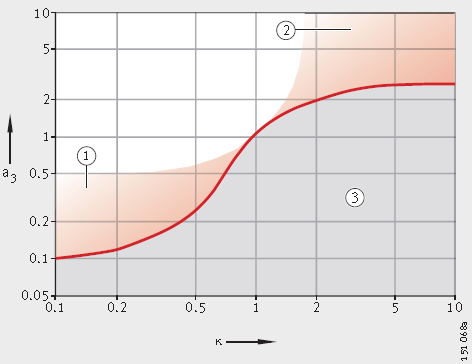 Guide values for the contamination ec

The values for the recommended rating life are guide values for normal operating conditions. In addition, the tables give the operating life values that are usually achieved in practice at various mounting locations.

If high, static or shock loads occur, the raceways and rolling elements may undergo plastic deformation. This deformation limits the static load carrying capacity of the FAG rolling bearing with respect to the permissible noise level during operation of the bearing.

If a rolling bearing operates with only infrequent rotary motion or completely without rotary motion, its size is determined in accordance with the basic static load rating C0.

In accordance with DIN ISO 76, this is:

The basic static load rating C0 is that load under which the Hertzian pressure at the most heavily loaded point between the rolling elements and raceways reaches the following values:

Under normal contact conditions, this load causes a permanent deformation at the contact points of approx. 1/10 000 of the rolling element diameter.

The equivalent static load P0 is a calculated value. It corresponds to a radial load in FAG radial bearings and a concentric axial load in axial bearings.

P0 induces the same load at the centre point of the most heavily loaded contact point between the rolling element and raceway as the combined load occurring in practice.