Internal clearance is the distance which the two rings of a non-installed bearing can move when they are pushed in opposite directions. A distinction is made between radial and axial clearance. 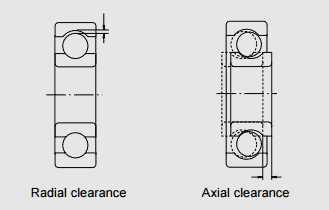 Internal clearance has a major impact on the operating performance of bearings. It affects factors such as their service life, vibration, noise level and heat generation.

Reduction in radial clearance due to the fit
If the inner ring or outer ring is mounted on the shaft or in the housing with an interference fit, the radial clearance is reduced when the inner ring expands or the outer ring contracts. This reduction varies for different bearing types and sizes, and depends on the shaft or housing design. The reduction is approximately 70 to 90% of the interference. After subtracting these reductions (δfe and δfi) from the theoretical clearance (∆0), the play is referred to as residual clearance (∆f).

Reduction in radial play due to differences in temperature between the inner and outer rings
The frictional heat generated during operation is conducted along the shaft and through the housing until it reaches the outside. As housings are better at conducting heat than shafts due to their mass, the temperature of the inner ring and the rolling elements is normally 5 to 10 °C higher than that of the outer ring. If the shaft heats up or the housing is cooled down, the resulting difference in temperature between the inner and outer rings causes the radial play to decrease. Subtracting δt from the residual clearance (∆f) gives us the effective internal clearance (∆).

The following equations can be used to calculate the extent of this reduction:

Normally, bearings retain a certain amount of internal play when they are operating. However, in some cases it is advantageous to set negative clearance to increase the bearing arrangement’s rigidity. This is called preloading.

Preloads are designed for use with bearings whose play can be set during installation, e.g. angular-contact ball bearings and tapered roller bearings. Generally, two bearings are mounted in a face-to-face or back-to-back configuration to create a duplex set with a preload.

The purpose of a preload in typical applications

A position preload is achieved by fixing two axially opposed bearings in such a way that a preload is imposed on them. Once they have been fixed in place, their position remains unchanged during operation.

In practice, three methods are normally used to obtain a position preload:

1b) Position preload and rigidity

When the inner rings of bearings A and B are fixed axially, the space measuring 2 δa0 is liminated. A preload of Fa0 is imposed on each bearing.

Bearing rigidity – i.e. the relationship between load and axial displacement – with a given axial load Fa imposed on a duplex set. 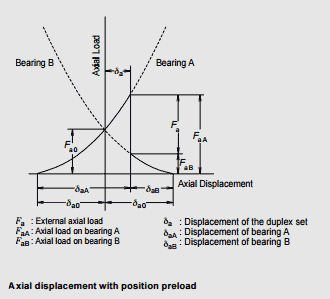 A constant-pressure preload is achieved using a coil or leaf spring. Even if the relative position of the bearings changes during operation, the size of the preload remains relatively constant.

2b) Constant-pressure preload and rigidity 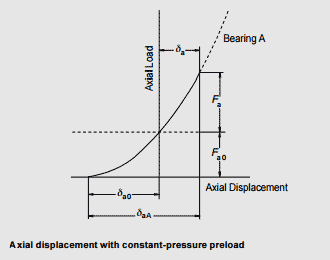 Position preload and constant-pressure preload can be compared as follows:

Amount of preload
If the preload is larger than necessary, it can result in unwanted heat generation, increased torque and a shorter service life. The amount of preload should be carefully calculated, taking the operating conditions and the purpose of the preload into account. In extreme cases, the bearing may last for just a few hours.

(2) Preloading axial ball bearings
When the balls in axial ball bearings rotate at relatively high speeds, slippage may occur due to gyratory moments acting on the balls. The larger of the two values obtained from the equations should be adopted as the minimum axial load in order to prevent this kind of slippage.