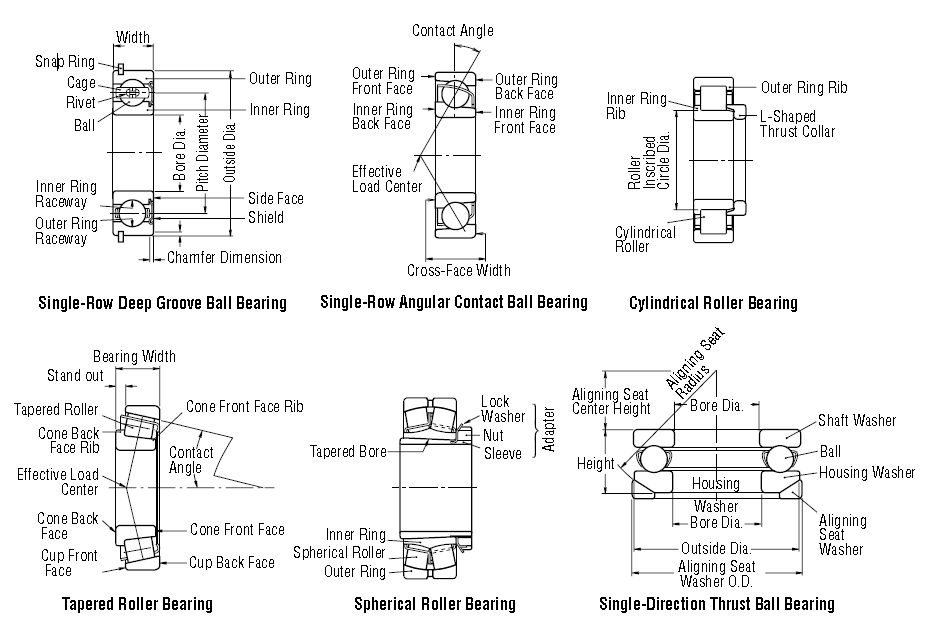 The most common bearing types and nomenclature of bearing parts are shown in drawing above.

Single-row deep groove ball bearings are the most common type of rolling bearings. Their use is very widespread. The raceway grooves on both the inner and outer rings have circular arcs of slightly larger radius than that of the balls. In addition to radial loads, axial loads can be imposed in either direction. Because of their low torque, they are highly suitable for applications where high speeds and low power loss are required.

In addition to open type bearings, these bearings often have steel shields or rubber seals installed on one or both sides and are prelubricated with grease. Also, snap rings are sometimes used on the periphery. As to cages, pressed steel ones are the most common.

The inner groove of magneto bearings is a little shallower than that of deep groove bearings. Since the outer ring has a shoulder on only one side, the outer ring may be removed. This is often advantageous for mounting. In general, two such bearings are used in duplex pairs. Magneto bearings are small bearings with a bore diameter of 4 to 20 mm and are mainly used for small magnetos, gyroscopes, instruments, etc. Pressed brass cages are generally used.

Individual angular contact ball bearings of this type are capable of taking radial loads and also axial loads in one direction. Four contact angles of 15°, 25°, 30°, and 40° are available. The larger the contact angle, the higher the axial load capacity. For high speed operation, however, the smaller contact angles are preferred. Usually, two bearings are used in duplex pairs, and the clearance between them must be adjusted properly.

Pressed-steel cages are commonly used, however, for high precision bearings with a contact angle less than 30°, polyamide resin cages are often used.

A combination of two radial bearings is called a duplex pair. Usually, they are formed using angular contact ball bearings or tapered roller bearings. Possible combinations include face-to-face, which have the outer ring faces together (type DF), back-to-back (type DB), or both front faces in the same direction (type DT). DF and DB duplex bearings are capable of taking radial loads and axial loads in either direction. Type DT is used when there is a strong axial load in one direction and it is necessary to impose the load equally on each bearing.

The inner and outer rings of four-point contact ball bearings are separable because the inner ring is split in a radial plane. They can take axial loads from either direction. The balls have a contact angle of 35° with each ring. Just one bearing of this type can replace a combination of face-to-face or back-to-back angular contact bearings. Machined brass cages are generally used.

The inner ring of this type of bearing has two raceways and the outer ring has a single spherical raceway with its center of curvature coincident with the bearing axis. Therefore, the axis of the inner ring, balls, and cage can deflect to some extent around the bearing center. Consequently, minor angular misalignment of the shaft and housing caused by machining or mounting error is automatically corrected.

This type of bearing often has a tapered bore for mounting using an adapter sleeve.

In bearings of this type, the cylindrical rollers are in linear contact with the raceways. They have a high radial load capacity and are suitable for high speeds.

There are different types designated NU, NJ, NUP, N, NF for single-row bearings, and NNU, NN for double-row bearings depending on the design or absence of side ribs.

The outer and inner rings of all types are separable.

Needle roller bearings contain many slender rollers with a length 3 to 10 times their diameter. As a result, the ratio of the bearing outside diameter to the inscribed circle diameter is small, and they have a rather high radial load capacity.

There are numerous types available, and many have no inner rings. The drawn-cup type has a pressed steel outer ring and the solid type has a machined outer ring. There are also cage and roller assemblies without rings. Most bearings have pressed steel cages, but some are without cages.

Bearings of this type use conical rollers guided by a back-face rib on the cone. These bearings are capable of taking high radial loads and also axial loads in one direction. In the HR series, the rollers are increased in both size and number giving it an even higher load capacity.

They are generally mounted in pairs in a manner similar to single-row angular contact ball bearings. In this case, the proper internal clearance can be obtained by adjusting the axial distance between the cones or cups of the two opposed bearings. Since they are separable, the cone assemblies and cups can be mounted independently.

These bearings have barrel-shaped rollers between the inner ring, which has two raceways, and the outer ring which has one spherical raceway. Since the center of curvature of the outer ring raceway surface coincides with the bearing axis, they are self-aligning in a manner similar to that of self-aligning ball bearings. Therefore, if there is deflection of the shaft or housing or misalignment of their axes, it is automatically corrected so excessive force is not applied to the bearings.

Spherical roller bearings can take, not only heavy radial loads, but also some axial loads in either direction. They have excellent radial load-carrying capacity and are suitable for use where there are heavy or impact loads.

Some bearings have tapered bores and may be mounted directly on tapered shafts or cylindrical shafts using adapters or withdrawal sleeves. Pressed steel and machined brass cages are used.

In double-direction thrust ball bearings, there are three rings with the middle one (center ring) being fixed to the shaft.

There are also thrust ball bearings with an aligning seat washer beneath the housing washer in order to compensate for shaft misalignment or mounting error.

These bearings have a spherical raceway in the housing washer and barrel-shaped rollers obliquely arranged around it. Since the raceway in the housing washer in spherical, these bearings are selfaligning. They have a very high axial load capacity and are capable of taking moderate radial loads when an axial load is applied. Pressed steel cages or machined brass cages are usually used.