Two single-row TIMKEN ball bearings manufactured specially for use as a unit are known as a duplex bearing. It may be considered analogous to a double-row bearing having the same bore and outside diameter, but twice the single-row bearing width.

The main purpose of TIMKEN duplex bearings in an application is to achieve greater axial and radial rigidity than is possible with one single-row bearing. The extra “stiffness” in these bearings is obtained by “preloading”. Preloading is incorporated into bearings by selective face grinding which is described in detail below.

Although TIMKEN angular contact bearings, such as the 7000, M-WI and MMWI types, are more commonly used in duplex arrangements, other types of TIMKEN bearings such as radial single-row open, shielded and sealed types, can be duplexed where required to meet specific conditions.

Preloading to a predetermined value is accomplished by grinding a certain amount of material off inner or outer ring faces so that before mounting the two single TIMKEN bearings as a duplex pair, the faces on abutting sides are offset an amount equal to the deflection under the “preload”.

When mounted, these faces are clamped together so that the TIMKEN bearings are subjected to an internal load caused by one bearing opposing the other. This “preloading” materially decreases subsequent deflection due to external loads applied to the clampedup pair.

Timken has established, for each bearing size, standard preload levels which are considered proper for most duplex bearing applications. Special preloads can also be provided to satisfy extreme requirements. For example, a heavily loaded, slow-speed rotating shaft may require heavier than normal preload in order to minimize deflection. It must be remembered, however, that although heavy preload provides slightly greater rigidity, it reduces bearing life and increases power consumption; therefore preload levels should be chosen with care.

The axial deflection of a bearing subject to thrust loading is based on Hertz’s theories for elastic bodies in contact. The general expression is:

Axial load-deflection curve of back-to-back monted angular-contact bearings. Curve A is for Bearing A, B is for bearing B, and C1 and C2 are preload curves.

A typical axial deflection curve for an unpreloaded TIMKEN single-row angular contact bearing is shown in above figure, as curve A. This curve represents the deflection characteristics of bearing “A” being subjected to thrust load T. The amount of deflection due to load T1 is much greater than the increase in deflection caused by doubling the thrust load to T2. This illustrates the non-linear deflection of a TIMKEN ball bearing.

Curves C1 and C2 show the deflection of bearings A and B flushmounted as a pair, with each bearing having a preload of T1 and T2 lbs. respectively. Comparing curves C1 and C2 with A shows the deflection of the preloaded pair is much less than that of a single unpreloaded bearing. This has been accomplished essentially by eliminating the “high deflection” points of curve A (from no load to T1 or T2 lbs.).

Curves B1 and B2 show the axial deflection of bearing B as mounted in Figure below from the preloaded conditions T1 or T2 to a no preload condition. 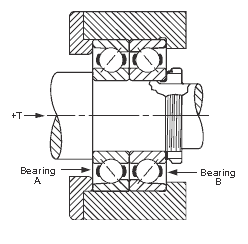 Preloading can be accomplished by the use of springs or spacer width adjustment, but your Timken representative should be consulted for design review.