When you select SKF bearings, you need to pay attention to operating temperature and speed. The relationships between the temperature and power loss of components within an application is complex and these factors, in turn, have interdependencies with many others such as bearing sizes, loads and lubrication conditions.

They influence many performance characteristics of an application and its parts, and do so in various ways depending on the operational state, such as at startup or in normal operation, when steady-state conditions have been reached.

Estimating the operating temperature and verifying speed limitations is a critical aspect of the analysis of an application.

This section provides details of these primary relationships, and guidance on what to consider.

Temperature has a major influence on many performance characteristics of an application. The heat flow to, from and within an application determines the temperature of its parts.

For a given bearing type, the bearing size, operating temperature and lubrication conditions are interdependent as follows:

The operating temperature of a bearing reaches a steady state when there is thermal equilibrium – i.e. there is a balance between generated heat and dissipated heat.

Provided that the load ratio C/P > 10 and the speed is below 50% of the limiting speed nlim, and there is no pronounced external heat input, then cooling via the surrounding air and foundation is usually sufficient to result in an operating temperature well below 100 °C (210 °F). Where these conditions are not met, perform a more detailed analysis, as additional heat dissipation may be required.

The heat generated is the sum of:

In many applications, the bearings are in locations where they receive:

The operating temperature of the bearings is influenced by this, in addition to their self-generated heat. Examples of such applications include:

The heat input from adjacent parts within the application or from the process can be very pronounced and is typically very difficult to estimate. The rule is to insulate the bearing, as far as possible, from the additional heat flow.

The heat dissipated is the sum of:

SKF bearing friction is not constant and depends on certain tribological phenomena that occur in the lubricant film between the rolling elements, raceways and cages.

Bearing frictional moment as a function of speed 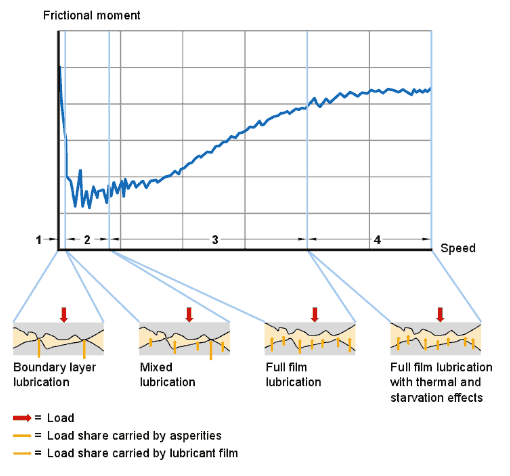 The diagram shows how friction changes, as a function of speed, in a bearing with a given lubricant. Four zones are distinguishable:

In the SKF model for calculating bearing friction, the total frictional moment, M, is derived from four sources:

If you are able to estimate a value for the heat dissipation from a bearing, Ws, then you can use the formula given in SKF model of bearing friction for calculating the bearing frictional power loss, Ploss, to estimate the operating temperature, Tbear, for a bearing in thermal equilibrium, under steady-state conditions, using

The speed capability of a bearing is normally determined by the bearing operating temperature. However, for certain bearing types and arrangements, the mechanical limits of the bearing components may have a significant influence.

Both speed ratings are cautionary limits, rather than strict prohibiting limits, but approaching either of them signals that deeper analysis of the operating conditions is required.

For SKF bearings with contact seals, no reference speeds are listed in the product tables. Typically, the limiting speed determines the maximum speed for these bearings.