The following overviews provide comparisons that can be used as a preselection between the different sliding materials and bushing types.

The above table compares the operating characteristics of the different bearing types and sliding materials. 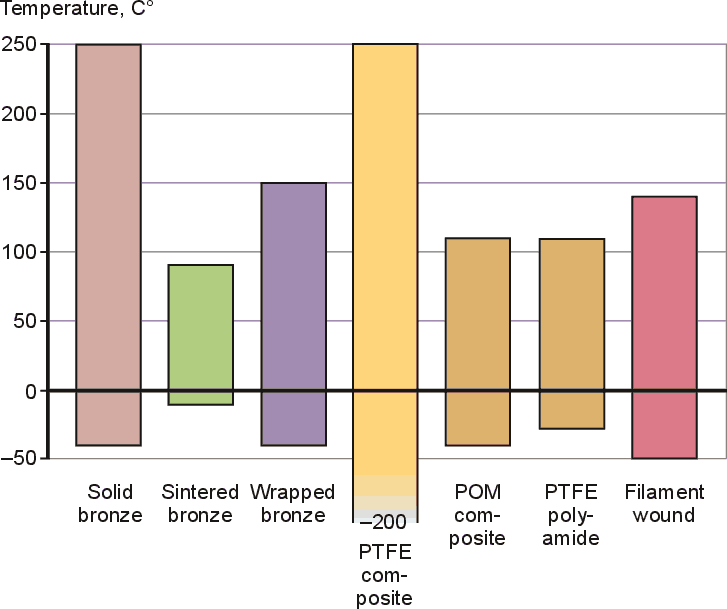 The above diagram compares the permissible ambient temperature ranges of the different bushing types and sliding materials under normal operating conditions. The temperature ranges for SKF solid and wrapped bronze bushings can be extended by using special lubricants.

The primary factors that affect the friction of SKF sliding materials against their mating surfaces include load, sliding velocity, surface roughness of the mating surface and lubrication conditions. Lower coefficients of friction are obtained under heavy specific loads at low sliding velocities, except for SKF sintered bronze. Both higher and lower friction can occur under extreme conditions. 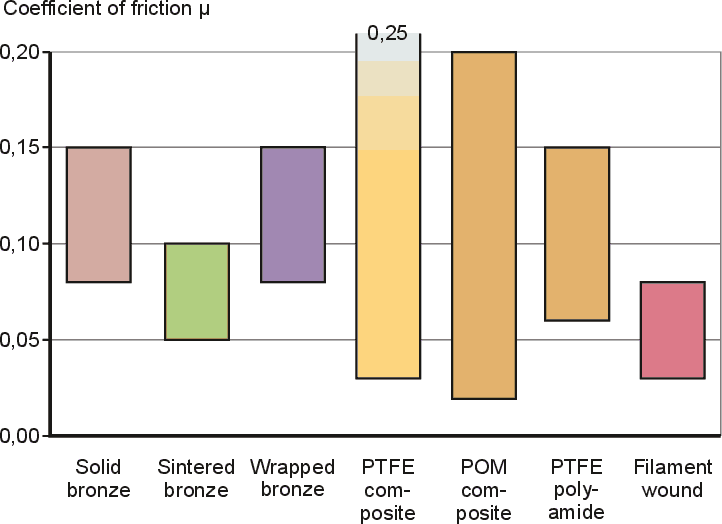 The above diagram compares the coefficient of friction under dry or initially lubricated operating conditions of different SKF sliding materials.

The load carrying capacity of a specific bushing depends on several factors including the type of load, sliding velocity and frequency of oscillation. 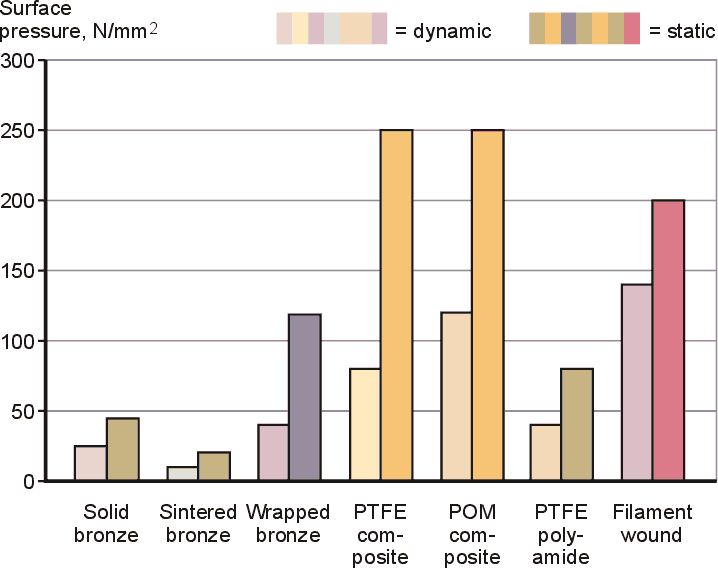 The above diagram compares the permissible specific bearing load of different SKF sliding materials under dynamic and static conditions.

All sliding materials supplied by SKF can operate under rotational, oscillating and linear movements. The permissible sliding velocity for a specific application also depends on load, shaft surface and heat dissipation. 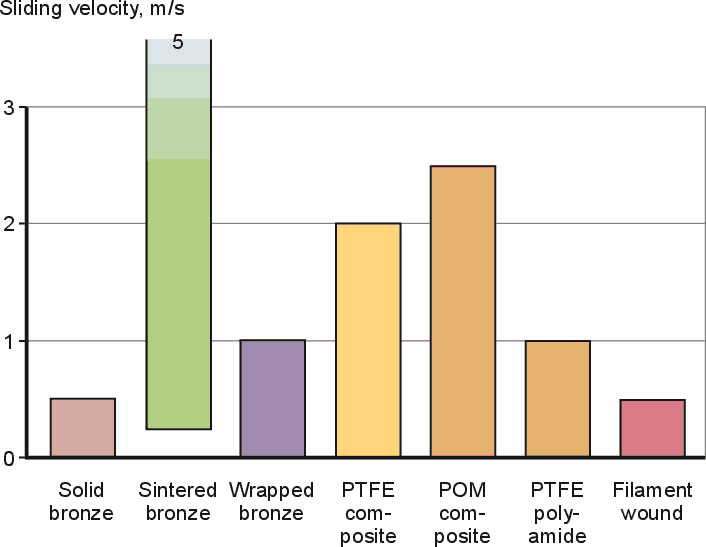 Larger tolerance classes can be applied when the application demands are moderate.
The surface roughness often has a significant influence on service life. However, a surface roughness with a value greater than 0,4 mm may have a negative effect.

The heavier the load, the harder the shaft should be. The higher the risk for embedded contaminants, the more a harder shaft is required.

The load carrying ability and wear behaviour of SKF plain bearings are determined by the specific conditions of a particular application. Therefore, any calculation can only provide approximate values. To determine the required size of bushings, washers or strips, the load carrying capacity, the service life requirements, operational reliability and a set of given operating conditions (such as load, sliding velocity) need to be considered.

When determining the required size of bronze, polyamide and filament wound bushings as well as strips, the stresses occurring in the sliding layer and sliding velocity should not exceed the permissible values.

For additional information about calculations on bearing life and size, refer to SKF bearing size.

For composite materials the basic dynamic load rating C is used together with other influencing factors, to determine the basic rating life of a bearing. As a rule it represents the maximum load that a bearing can sustain at room temperature when the sliding contact surfaces are in motion. The maximum permissible load in any individual application should always be considered in relation to the desired rating life. The basic dynamic load ratings quoted in the product tables are based on the effective projected sliding surface and the specific load factor K that takes the different composite materials into consideration.

In this definition it is assumed that the load acting on a bushing or flanged bushing is purely radial and that the load acting on a thrust washer is purely axial and applied at the centre. Dynamic load conditions are essentially oscillating movements or rotations under load, but can include micro sliding under variable load (e.g. as a result of vibration) or operation under high frequency alternating loads. Where oscillating movements or rotation under load usually produce wear, the other conditions may result in fatigue.

A distinction is made between the basic rating life and the service life actually achieved.

The basic rating life is a guideline value that will be attained or exceeded by the majority of a large number of apparently identical bearings under the same test conditions.

The service life actually achieved by apparently identical bearings under identical operating conditions has been found to differ both in laboratory endurance tests and in service at operating conditions. These include not only the magnitude and type of load but also other factors such as contamination, corrosion, load and movement cycles of high frequency and shock loads. These factors are difficult or even impossible to quantify.

It is not meaningful to try to calculate the basic rating life for these products. In practice, the various influences and factors that affect the service life actually achieved, interact in a very complex manner and are not always completely quantifiable.