Simple mounting due to fixing holes
Due to the fixing holes in the bearing rings, mounting of the units is very simple. After mounting, the bearings are radially and axially preloaded. The mounting dimensions of all series are identical. 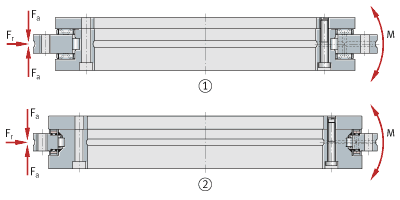 YRTS suitable for high speeds with low frictional torque
For the bearing arrangements of direct drive axes, there is the series YRTS. Due to their high limiting speeds and very low, uniform frictional torque across the whole speed range, these bearings are particularly suitable for combination with torque motors.
For higher running accuracy requirements, both series are also available with restricted axial and radial runout.

INA axial angular contact ball bearings are particularly suitable for precision applications involving combined loads. Their preferred areas of use are bearing arrangements in rotary tables with a main spindle function, for example in combined milling and turning, as well as in milling, grinding and honing heads and in measurement and testing equipment.