Kaydon slewing ring bearing can be designed for use in applications where loads originate from a single direction or multiple directions relative to its axis of rotation. All of these loads can be resolved into four resultant loads acting on, about, or through the bearing’s center. They are referred to as radial, axial, moment and torque. These are used to evaluate the size and capacity of the bearing and integral gear if one is incorporated. Three of these loads are visually depicted in Figure below. The fourth, torque, acts in a manner as to try to rotate one of the bearing rings relative to the other. 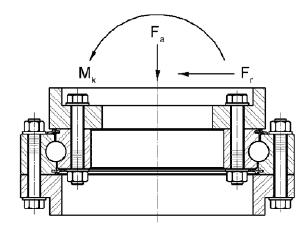 Load originated by the equipment and work being conducted is transmitted to the Kaydon bearing through the mounting structure and mounting bolts. While KAYDON slewing ring bearings have the ability to accept all types of load combinations, they are primarily designed for loads aligned parallel to the bearing’s axis of rotation. These axial or thrust loads originate from a source located at a distance from the bearing’s axis of rotation and also generate a moment load about the bearing’s center.

Typically, axial loads are applied in a manner that would tend to compress the bearing faces toward each other. See Figure below. Such loads are distributed uniformly around the mounting structures and surface area of the mating bearing rings, permitting a more even load distribution to the rolling elements within. The result is a lower stress level on all components involved in the transmission of the load.

When the axial load is “suspended” from the bearing, it is concentrated predominantly in a smaller area around the bolts. This is a critical difference that must be considered in the design.See figure below.

A load aligned perpendicular to the Kaydon bearing’s axis of rotation is referred to as radial. When the radial load originates from a source located above or below the bearing’s rolling elements, it generates a moment load about the bearing’s center. In applications where radial load is significant (defined as greater than 10% of any axial load) or the predominant load, our standard Kaydon slewing ring bearings may require modified contact angles, ball separators, mounting hole configurations, or the addition of piloting diameters to accommodate these forces.